ONE OF THE BELTISLOE GROUP OF PARISHES

DOMESDAY BOOK – Records exist of a church at Bodebi (Boothby).

Charles 1st is recorded as saying;

‘I carry my ears to hear other preachers. I carry my conscience to hear Mr Sanderson and to act accordingly.’

It had, according to a contemporary report in the Grantham Journal of ‘become impoverished and disfigured by the ravages of time and neglect’.

The architect John Loughborough Pearson was chosen to be responsible for the restoration.

Pearson was one of the most famous of Victorian church architects; he was also responsible for Truro Cathedral 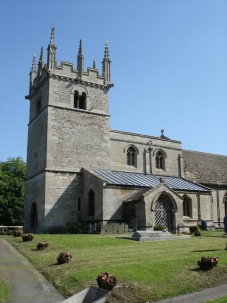 THE CHURCHYARD – This was extended to the South, during the restoration, and the Lych - gate built in 1896 is now a listed building.

THE SOUTH PORCH – Built in the 14th century with a gabled flat roof. The only ancient piece of glass in the Church is in these windows – 15th century and depicts the Harrington Coat of Arms. Meetings of the P.C.C. were held in the porch until the end of the last century.

SOUTH AISLE – Rebuilt and extended in the 14th – 15th century (Perpendicular windows). Norman Font with oak cover made 1896 carvings depicting the seven virtues Lady Chapel was formed at the church restoration; the statues on either side of the altar are of our Lady and St. Andrew. The Mothers Union Banner was embroidered by the late Mrs W Chantry wife of William Joseph Chantry Rector from 1941.

THE TOWER – Built at the end of the 12th century has a fine Norman West Doorway with Waterleaf capitals.

The groin vaulting in the lower stage is from 1896.

The bell openings have Saxon type mid-wall shafts, whilst the top of the tower has battlements with eight pinnacles; on the S.W. pinnacle is a coat of arms of the Paynell family.

The pinnacles were repaired in 2005.

THE BELLS – The Church did have three bells as follows:

These were replaced in December 2008 with a peal of five bells dating from 1867. Click here to see more about this project.

The roof was raised and the clerestory added early in the 14th century.

At the restoration in 1896 the low Norman arch dividing the nave from the chancel was demolished and the existing arch was built. The Rood Loft was destroyed at the reformation.

Piscina, or basin for washing vessels, in South Wall.

Aumbry or small cupboard, and filled in Priest’s Doorway in the North Wall.

Marble pavement was part of the 1896 restoration.

WINDOWS –   The windows in the church were made by Clayton and Bell as part of the restoration, they were one of the largest and most respected stained-glass makers of the Victorian period and the designer George Daniels, who was an apprentice at Clayton and Bell, went on to become a much sought after freelance designer. The Jesse Window is especially impressive.

Prior to 1896 this aisle was used as a chapel and is the cemetery of the Harrington, Tyrwitt and Litchford families. A brass memorial to the Harrington’s is on the South wall of this aisle.

THE ORGAN – In 1896 Mrs Thorold commissioned Robert Hope Jones to install an Electric organ in the church. This was powered by re-charchable batteries; at first the organ pipes were housed in the newly cut opening in the East wall of the Tower, whilst the console was at the East end of the North aisle.

Robert Hope Jones is either reviled or revered in church building circles yet the fact remains that he was the inspiration for the Mighty Wurlitzer Organ arguably America’s finest product of the early 20th century and  at the reopening service in 1897 Hope Jones himself played the organ.

This original organ proved to be unsatisfactory and it was rebuilt in 1904 by Norman and Beard and converted to pneumatic action and the organ pipes were rehoused in an oak case in the north aisle.

In about 1900 the Low Church Kensitites, who were a group of men opposed to ritual in the church, cycled from Grantham with the intention of breaking the sanctuary lamps and other decorations. The villagers resisted their efforts with ripe tomatoes and bad eggs and seized a revolver from one of the party.

This revolver was hanging for a time in the vestry. It then disappeared but came to light in 1955, underneath the organ, as this was being cleaned and overhauled.

It was taken to the police station!